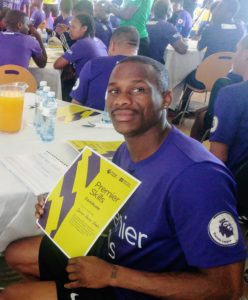 Rooney with his certificate

While growing up, Rooney’s whole life was about playing football. He even played for the youth team of a professional club before he got kicked out for cheating regarding his age.

Growing up without a father, and without football, he followed the example of his older brother, a high-ranking member of a gang specializing in armed truck robbery. When his brother died, Rooney ‘inherited’ his position.

Not long after this he got arrested and was sent to prison in Port Elizabeth.  One of the wardens, knowing about Rooney’s football talent and having heard about Ambassadors Football Hope Academy Project in Drakenstein Prison, arranged for Rooney to be transferred across the 700 km distance to be part of the Academy.

The program focuses on developing the young men in Football, Faith and Future. For Rooney, joining was all about football. Even though he was a Muslim, he accepted the rest of the clearly Christian faith-based program so that he could have the chance to play.  Being in the cell with 24 other men (ranging between the ages of 18-25 years) who were all striving towards a better future didn’t leave him unaffected.

It was astonishing for Rooney that the coaches and all the inmates would value him as ‘normal’ and treat him with an unconditional love that he had never experienced before. Ambassadors Football could observe Rooney changing immensely during his time in the Hope Academy and in May 2015 he reported the amazing news: “God had been working on me intensively for two weeks until I made the decision to accept Christ as my Lord and Saviour.”

From that day on he is not only passionate about football, but passionate for God and impacting other people. Rooney is one of many new leaders, father figures and positive role models who are trendsetters and change agents in their surroundings.

After his release he joined the team of “City Mission”, one of Ambassadors Football’s partner ministries, and started working as a football coach in Hanover Park, one of the most gang-ridden communities in Cape Town. His unique background allows him to step into a territory where most of us would not be able to.

As Ambassadors Football is focusing on fuelling a coaches-discipleship movement, they have identified Rooney as one of the mentor coaches they want to disciple and specifically invest in, so that he can not only impact his players but also journey with other coaches. He is not only ministering to the community; he is also going back into Drakenstein prison, where he will develop and disciple a group of inmates as football coaches, father figures, life coaches and disciple makers.