Home
Afrika Ekumene
We can't only hand out food parcels ...

We can’t only hand out food parcels … 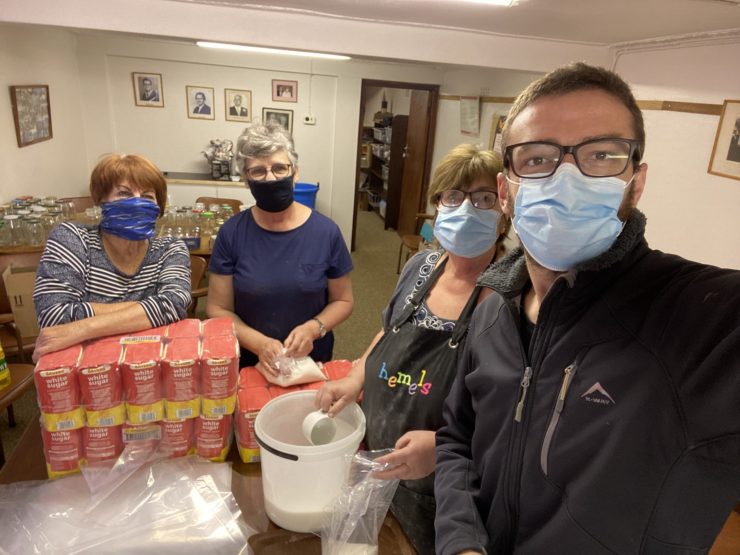 “We learn a lot – to be a church is not only about maintaining a congregation but we are sent out by God to establish God’s Kingdom in the world – to cure and heal broken people; to help the needy – this is what is actually our calling, this is why a congregation exists,” explains Rev. Leuvennink from Bredasdorp where heartwarming projects, especially one amongst a group of  Zimbabweans, are a result of a community who comes a long way to getting closer to one another.

But where did it start?

On Pentecost Sunday 20 May 2018 URCSA and the NG Kerk congregations at Bredasdorp reunited to become a merged congregation. They have three full-time ministers (Rev. Braam Coetzee, Rev. Jaco Botha, and Rev. Arné Leuvennink) and one retired parttime minister (Rev. Cornie van der Merwe) who work together exceptionally well, although the unity of the congregation is an ongoing, full-time challenge.

Since lock-down in April this year, their focus, like other congregations in our country, shifted away from worship services and meetings to people who don’t have food on their tables, because of the lack of income.

Right from the start, this reunited congregation started to hand out soup and bread seven days a week to 2 000 people, a project that was established overnight by involving eight denominations; working very well together. This project is still ongoing, albeit three days per week now and the church leaders meet every Friday morning.

A second project that is mainly driven by the reunited Bredasdorp congregation, is the distribution of food parcels that are more sustainable and compiled in such a way that a family of four can live from it for two weeks. This project exists actually for a few years now but escalated because of the increasing basic needs since lock-down, and since April they started to distribute food parcels on a daily base at the homes of the needy.

In the last week of April, they discovered a group of 30 Zimbabwean households that lost their income, and who have no network to support them, except to share the little bit they have. The challenge these Zimbabwean households have is that they are not eligible for UIF or food parcels distributed by the government. Most of these people are day labourers and earn from day to day – a huge problem since lock-down. They have no refuge or resources.

After an appeal on their congregation members, donations poured in from all sides; they even received a donation of R21 000 from the Reformed Church in Switzerland’s Witness Ministry thanks to an old Bredasdorper who now lives there and heard about Bredasdorp’s appeal on YouTube by chance. This enables them to provide food parcels (five to twenty) to the Zimbabwean households on a daily base – since the beginning of May, more than 400 food parcels have been distributed in total – starting every afternoon at 4 until 6 or 7 o’clock.

These abovementioned projects have to do with the path these URCSA and NG Kerk congregations walked the past ten years in the process of reuniting – where they started to talk with one another and learned to get to know one another until they formed one united congregation. “It taught us to look away from our own needs and interests to the kingdom of God, to look at people who are different from us, to people we don’t know, but who are also part of God’s Kingdom and God’s creation – to also get to love them, not to see them as foreigners in our town anymore,” explains Rev. Arné Leuvennink, one of the three full-time ministers.

There is a group of dedicated people (amongst others, also students) who set aside their time to help to buy food, packing food parcels, and to distribute it – a daily challenge is to just find the needy Zimbabweans in these informal settlements.

Two of the ministers also help with the pastoral ministry to the Zimbabweans when distributing food parcels, chatting about their circumstances, building relationships, and listening to their stories. Although the language barriers complicate communication, the abundant gratitude of the Zimbabweans is heartwarming.

They also have a great need to become part of a church community. “We hope to establish a ministry amongst the Zimbabweans with a pastoral worker who knows their language, Shona, and to integrate with our congregation as a Shona speaking part of our congregation,” says Rev. Leuvennink.

They get to know Zimbabweans who have a good education and who had good jobs in Zimbabwe but they have to survive now from day to day in a sink hut without decent sanitation removal and streets. “We are all sent – we can’t only hand out food parcels, but we have to support them to create a livable environment and to walk the path of recovery with them,” encourages Rev. Leuvennink.