Impacting the lives of Malawian women 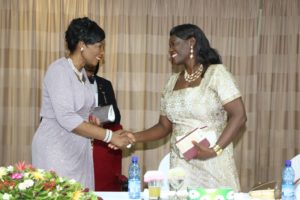 Dr. Phoebe Chifungo (right) shaking hands with the First Lady of Malawi, Gertrude Mutharika. She was the guest speaker on the topic, ‘Woman of Excellence’.

How does it happen that an ordinary Malawian girl grows up to engage with members of her country’s parliament and present the topic of “Women inclusion in decision-making positions in the public sector” at seminars with the Human Resource Management, the Development Department of Government, and others?

Dr Phoeboe Chifungo obtained her PhD in Practical Theology at Stellenbosch University in 2014 and the topic of her thesis was ‘Women in the CCAP Nkhoma Synod:  A Practical Theological Study of their leadership roles.’ Since the completion of her studies she has been teaching women in the church how valuable they are in the eyes of God.

She has been consulted by the Evangelical Association of Malawi and the Norwegian Church Aid to facilitate at seminars where they sensitise church leaders on the rights of women and on issues of gender-based violence.  She has also been involved in writing a training manual aimed at informing and teaching people about women’s rights against gender-based violence.

Phoebe was running the above-mentioned Women Inclusion Project as an advocacy manager of the CCAP Nkhoma Synod and Society Department in 2016/2017.  She was mainly involved in making sure that the recruiting bodies in the government and parastatal bodies include women in decision-making positions. She was also involved in encouraging women to upgrade themselves in terms of education if they want to be in decision-making positions. Their main tools were the results of her studies and section 11 of the Gender Equality Act of the Malawian government.

Phoeboe comes from a Christian family, but with a patriarchal background where females are not highly valued. As if this wasn’t enough, she also discovered that the church was not women-friendly.

These personal struggles and the degrading perception and attitude of the church and society towards women motivated her to come to Stellenbosch where she was mainly supported by the DRC Kenridge and Witness Ministry to first do her Post Graduate Diploma, then her MTh and finally her PhD.

She also works as a part time adjunct lecturer at African Bible College in Lilongwe, where she teaches master’s degree students, and at Malawi Assemblies of God University, where she teaches Christian leadership, philosophy, missiology and New Testament to undergraduate students.

May you never cease to impact the lives of women, Phoeboe.